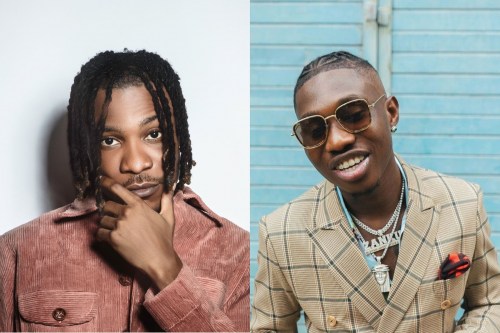 1DA BANTON and ZLATAN ARE UNPERTURBED IN NEW VIDEO FOR “NO SLEEPING”.

Raving Nigerian singer, 1da Banton has released a new video for his buzzing tune ‘No Sleeping’ featuring Zanku pioneer, Zlatan. The singer who was been booked and busy in different cities across Europe has decided feed our eyes with the vibrant video.

The track released alongside the likes of the No Wahala, Sekkle Down, The Benz, as part of his debut album ‘Original Vibe Machine,’ welcomed positive reactions and critical acclaimed from fans in different parts of the world. The carefree video is directed by Squareball Entertainment boss, Adasa Cookey who’s video credits include Davido, Rudeboy (P-Square), Femi Kuti, Wande Coal, Runtown, Stonebwoy, Simi and more.

The video matches the song’s carefree, fun and party-esque content. “Because no sleeping tonight o, shayo dey my cup o” 1da Banton chants, as aptly displayed in the video, it’s all about the party and fun-living. Zlatan on the other hand complemented 1da Banton’s catchy hook with lyrics such as, “you go fresh, you go confirm say money dey Lagos, you enjoy,” while confirming the advantages of the good life.

‘No Sleeping’ has deservedly enjoyed a warm reception from listeners and going by its stellar quality, it is projected to be yet another continental smash from the Port-Harcourt-born singer and record producer.

The new video serves as a follow-up to the summer bop ‘Summer Love’ which was released back in June.