by Sleekjamz
in EP, Reviews
0 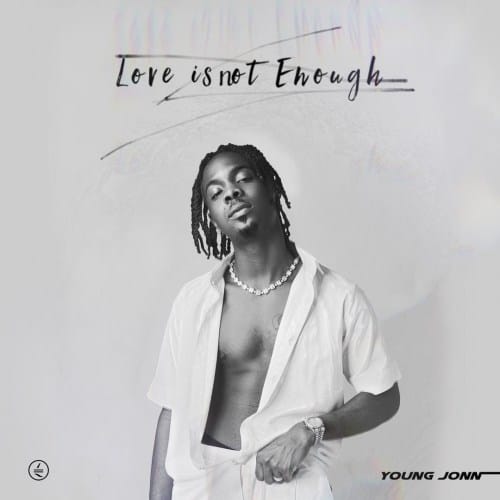 Many already know Young Jonn is synonymous with the tag “The Wicked Producer” but more still lies underneath his production genius.

The amazing talent gained mainstream prominence in 2014 after his impeccable production of Olamide’s “Story For The Gods” from the Street OT album.

Young Jonn further sealed his name on the lips of fans creating amazing beats for the likes of Phyno, Lil Kesh, Davido, Viktoh, Kizz Daniel and Naira Marley just to name a few.

In 2019, Young Jonn displayed his multi-talented side with the release of the song ‘Mama Yo‘ which was received with a positive appeal. In continuing with the streak, Young Jonn released the Joeboy and Tiwa Savage featured song titled ‘Let Them Know‘ in 2020. ‘Incase‘ and “Off You” followed suit.

In transitioning to a musical artiste, Young Jonn signed a recording deal with Chocolate City and debuted with the record “Dada” which is the lead track of his EP, “Love Is Not Enough”. 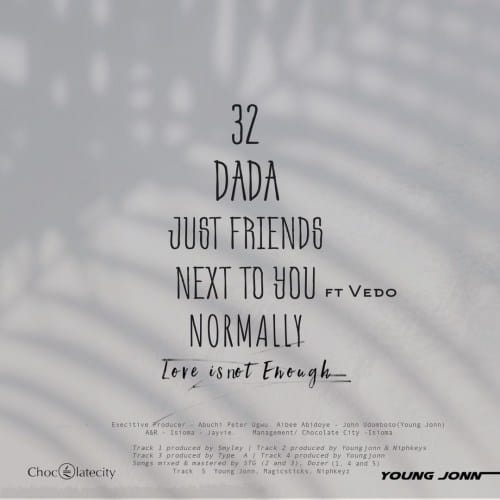 The 5-track EP opens with “32” a poppy love tune that just flows freely with catchy lyrics and mesmerizing kicks. The singer makes it a point of duty to capture the listeners’ attention with the first track.

Following next is the already charting “Dada”. Young Jonn’s A&R does an incredible job by picking this record as the lead single. Without a doubt, “Dada” certainly made fans yearn for the EP while it was yet to be released.

In “Just Friends”, Young Jonn blows the mind away. His songwriting skill is captivating and he paints a relatable story of “wanting to eat your cake and still have it back.”

“Next To You” is the only track with a feature on this project and he works alongside Vedo on this one. This track is another love tune that sees the singer/producer professing his unending love for his love interest. On the other hand, Vedo’s vocals are quite captivating as he laces his rhythms perfectly on the beat. Quite a catchy piece!

The EP closes with “Normally” another love inspired record. Young Jonn certainly knows how to get on the good side of the ladies and this record says it all.

Conclusion; The 5-tracks on this project are love inspired and Young Jonn might have just painted a few of his realities beneath those songs. Finally, Young Jonn has used this EP to display his musical versatility as a singer-songwriter, producer and sound engineer.

“Love Is Not Enough” is certainly a debut with first-class standards.