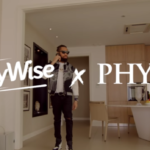 The long awaited intriguing visuals for the banging tune in Nigeria is here, HighWay by DJ Kaywise featuring Phyno Fino.

It’s no doubt 2021 is already a big year for DJ Kaywise, as he rolls out with the visuals to the biggest record of the year “HIGHWAY” which was greatly delivered by Phyno.

Kaywise Entertainment boss, DJ Kaywise teams with PentHauze chairman, Phyno to deliver another banger titled “High Way” after a successful last music outing. This new jam is produced by Yung Willis and it will make you get to the dance floor.

Born August 4, 1992, Ayorinde Kehinde Okiki with the trade name DJ Kaywise is a prominent DJ/ VJ. DJ Kaywise is unarguably the most outstanding DJs in the class of street bounce in Nigeria as he is well recognized by industry shareholders for his amazing and trendy mixtape in Africa and Diaspora.

Kaywise who started his career as a Disc Jockey in 2010 after breaking into a mixtape local market at Alaba- Ojo had not stopped here but his continuos effort had made him an A-list DJ in Nigeria. He is known for over 10,000 CD, Mixtape, over 50 online released mixtape and released multiple music and visuals with top class Nigeria and African artistes.

‘High Way‘ is an Afro-Amapiano which Okiki used to wraps up the year 2020, Phyno Fino shares that they on the fast track/lane, living fast life… Onye High Way! GET AUDIO HERE