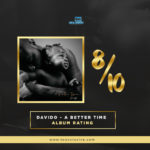 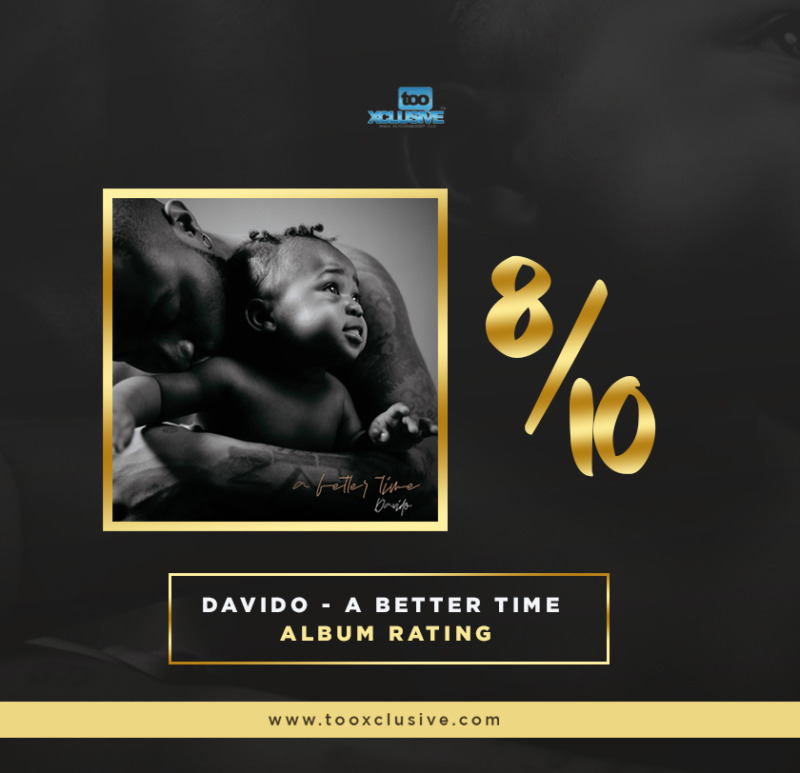 Davido Experimented And Shines On “A Better Time” | Album Review

The beauty of Davido’s rise to fame is the fact that although born rich he thrives too well in the art that defines his passion. Fans and critics have different opinions about an artiste but the true weight is laid on the artiste who is aspiring to grow and be all they are. Davido has no extra-ordinary talent as an artiste but the man Davido is extra-ordinary, and he knows it. So, what he lacks in the talent, he makes up in charisma, courage, tenacity, and passion.

“A Better Time” is a show of growth and development, although there are quite some misses on this one, the fact that he didn’t change the status quo and still kept it fresh with a slew of incredible features that makes it spectacular.

Davido has always had a good sense of expression when making music, which gets you hooked on his songs and you really don’t get why at first. This is because he has the right foot on track whenever he makes records and he challenges himself too, making exceptional record most of the time. He curves Melody to a record that got fans in awe especially when he puts a little bragging about his affluence!

“I learn from the best/ the best/Davido/sho get/mo bad/forget“… That’s just an excerpt from the Mayorkun lyrics on “The Best”— a song that brings two label mates to the table, which is one of the album’s best effort. The song hook seems like a Shade at those vocalists/singers who says Davido isn’t gifted and tags him as Frog Voice but Davido made it known that he is The Best at doing what he does and he is good for the Hits!!! which he sure has in his resume.

“Fem” is also another track that stood out on the album. “Fem” is allegedly a Burna Boy Diss record, and it got a lot of streams in over a week. It was the most viewed and talked about Nigerian song that took fans and critics to a run for quite a while. The trumpets, horns, and percussion on this one have a different ring to it that got you hooked on first listen. NOT EXACTLY WHAT YOU EXCEPT FOR A DISS RECORD though!

It’s a big deal to have a “Nicki Minaj” feature and on “Holy Ground” the two had a good collaboration that will definitely make a lot of playlist around the world. A song about affection, and a strong infatuation for the opposite sex. It’s a good effort, but they can make a much better song next time hopefully.

“Tanana” features, “Tiwa Savage” and it’s another big feature that could have been utilized more like the previous record. It has the potential to go higher but fans are happy to be blessed with a collaboration by the two artistes.

“Mebe” features, “Mugeez” it’s a blend of Afro and Dance hall elements. There are some cool moments on the record, and it sounds very Africa-que which is something that makes you want to listen to the record over again.

Like, “Mebe” Davido nabbed another African who has a great voice, “Sauti Sol” on a very Africa-que instrumentation that has a lot of indigenous elements. Titled, “On My Way” this is one of those efforts that shows Davido willingness to experiment and collaborate with other artistes. And sincerely it’s not a bad try at all.

The beat for “Sunlight” is heavy with percussion and Davido ad-lips gives it a feel that would make you wish you were at a beach party on summer evening.

And so is, “Heaven” which is very different from what you would expect from Davido. The trance-like, Afro-pop music sounds very uplifting and vibrant. The song has a cut edge mix that makes it crisp and clear. Another good record and effort by O.B.O

“Fade” features newcomer sensation, “Bella Shmurda.” This to me is one of the misses of the album. There can be hopes for a better collaboration between the two artistes in future.

Davido pushed himself on this album and did okay with the way he went with the features. For example, on “Birthday Cake”, a hip-hop record featuring, “Nas” It was amazing how he made that record sound very interesting. It’s fresh and can easily become a hit on many hip-hop charts around the world.

I think, “Very Special” is the best song on the album when you think of how composed the entire record is. It’s very synonymous to songs from his old album’s but there is a new vibe to it that made it stand out among songs.

“Shopping Spree” is another Hip-hop song that features, “Young Thug” and “Chris Brown.”. This will be the second time he has working with both artiste, and I think the collaborations are better.

“Something Fishy” is Davido in his comfort zone like, “Very Special” you can hear all that energy and grace in his voice all over the record. Although he didn’t change in any way, he has a good touch on this one than he had on the others.

“So Crazy” is a Dancehall/Hip-hop song that features, “Lil Baby.” At first, you wouldn’t even understand why Davido will take, “Lil Baby” for this record but that’s the extra-ordinary thing about him. He understands a lot about his style that makes him get exceptional on some songs. This is one of those standout records on the album.

Continuing in the international streak, He features Mayorkun and South African, “Sho Madjozi” on “I Got A Friend” a South Africa sound – Amapiano blended with Afro-beat. The song is about the influential people he knows and his Dad happens to be on the list. Sounds cool.

“La La” features “C-Kay”, A blend of Afro-Pop and Amapiano which samples, “Makossa” It’s quite an effort but a very experimental one.

“Jowo” is an Afro-Pop song which is centered on love. Another song that is very reminiscent of Davido’s previous album. I think it should have had a Peruzzi on this one.

In Conclusion; Davido has come a long way and deserves every rose he gets. The features are top-notch but fall short of what is expected. The songs with features are less utilized. Although, one has to praise his courage for experimenting on different sounds, and the tenacity he has when trying out these different sounds and collaboration yet one can’t deny that the album had its misses and Aha moments too.

It’s a mixed reaction to how the album is perceived. “A Better Time” it’s a great project that has a handful of good records but there are a lot of misses, and the worst of them is, “Fade” featuring, “Bella Shmurda”.

The album has the potentials of becoming a classic… One can see the possibility of that if Davido will take more time to perfect the experimentation he attained on it.

The post Davido Experimented And Shines On “A Better Time” – Album Review appeared first on tooXclusive.